PENANTI LIVE
http://linasoo.com/penanti.html
Posted by Blogging untuk PR at 2:49 AM No comments:

http://anwaribrahimblog.com/
Posted by Pakatan Rakyat Online at 2:45 AM No comments: 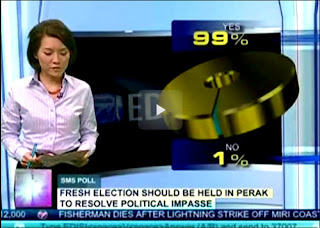 http://anilnetto.com/malaysian-elections/ntv7-poll-99-want-fresh-perak-elections/
Posted by Pakatan Rakyat Online at 9:54 AM 1 comment:

Posted by Pakatan Rakyat Online at 9:00 AM No comments:

What RM25 million can buy, something that goes hee-haw (UPDATED)

Posted by admin
Friday, 08 May 2009 18:54
Do I hear a nationwide boycott in the making? Or are the Chinese still going to continue giving money to Vincent Tan and then blame the Malays for what happened in Perak?
NO HOLDS BARRED
Raja Petra Kamarudin
Hee: I didn't use pepper spray
Hee described the sitting as a "nightmare" and claimed that her former DAP colleagues were out to harass her.
She also complained that she was negatively portrayed by press reports.
She said that the note thrown at her was a RM1 note, not a RM50 note as reported in the media.
To set the record straight, she said her former party colleague Thomas Su (DAP-Pasir Pinji) waved a RM50 in front of her but did not hand her the note.
"If I was given RM50, I will keep it and give it to someone in need. But he is a ‘kedekut' (cheapskate). He held on to it and waved it. I know he is 'kedekut'." she said.
On whether she had used the pepper spray against Yew Tian Hoe (DAP-Aulong), Hee said that she pointed her hotel key-chain, not a pepper spray canister.
"It is just a key-chain. 'Hati mereka ada hantu' (They have a guilty conscience)," she said, adding that she is suffering body aches from the scuffles.
However, a clip taken during the assembly yesterday did show Hee pointing what appeared to be a pepper spray canister at Yew (photo above).
An extract from Malaysiakini, 8 May 2009 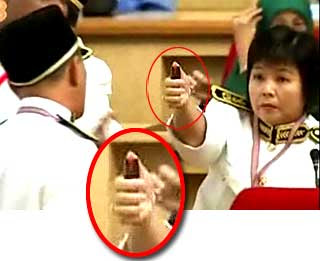 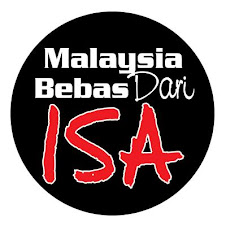